Puglia is a land with two sides. The first is what we can clearly see. The Puglia with its sea, trulli where the blinding sunlight reflects off the white limestone walls of the Itria Valley. The Puglia with its cathedrals and many castles, patron festivals and good food.

Then there is the other side of Puglia, the hidden dark side which you have to look hard to find, but will be pleasently surprised if you are willing to look for it. The hidden Puglia is a world of caves, rock churches, antique cripts, underground olive mills and churches. 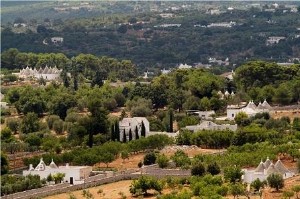 The Itria Valley is a small area located in the centre of Puglia. It is famous for its trulli, a typical ancient house of stone with a conical roof. The valley spreads over the plains of the Murgia between, Alberobello, Martina Franca and Ostuni. A feature of this area is grape coltivation, in fact excellent wine is produced here for example: Martina DOC and Locorotondo DOC. Olive groves can also be found here and excellent extra virgin olive oil is produced in this area. 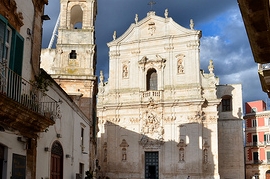 The historical centre of Martina Franca is one of the most beautiful and characteristic of Italy. When strolling through its narrow streets and alleys the Baroque art emerges in all its beauty. Entering the centre by going under the 18th century Arch of San Stefano you can see immediately on the right the Ducal Palace (Palazzo Ducale). Continuing your walk you will find The Collegiate of San Martino, the San Domenico Church and the Carmine Church. In the countryside surrounding Martina Franca there are more than 250 antique farmhouses of rare beauty. 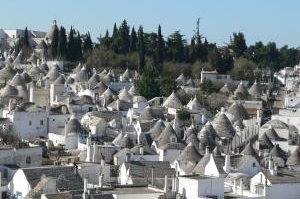 Alberobello is the capital of the trulli for which it is renowned throughout the world. It is a UNESCO World Heritage Site. The monumental area is made up entirely of trulli, grouped together and aligned along alleyways and winding streets that climb the hill. The most famous example is The Sovreign Trullo (Trullo Sovrano) a two –storey trullo found behind the mother Church. 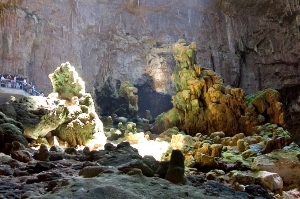 The Caves of Castallana represent one of the most important and famous speleological complexes throughout Italy. It is a system of caves 3km long and 70 m deep. It reveals stunning limestone concretion, created more than 90 million years ago in the Cretaceous Era, thanks to the crumbling of limestone rock layers and the slow trickiling of water. At the entrance to the caves you find The Grave, the largest cave of the complex. In the centre stands the imposing group of stalagmites (The Cyclops). They are illuminated by the sunlight that filters through the natural skylight. 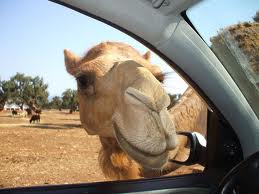 In the Forest of Fasano (Selva di Fasano) you find The Zoosafari. One of the biggest zoos of its kind in Europe. The animals do not live in cages which ususally happens in zoos but they roam freely. Visitors can drive through in their own vehicle and observe the wildlife following of course a specific route. Buffalos, lions, giraffes, monkeys are just a few of the animals you will find roaming around the vehicles and getting on with their day to day life. 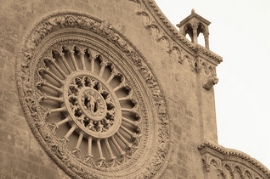 Ostuni is a wonderful picturesque town perched on a hill. From a distance it looks almost like a small village from a fairy tale. Due the fact that all the houses are painted with white limestone, it has earned the name The White City(Città Bianca). In the town centre, right on top of the hill, stands the cathedral whose architedtural structure and interior are a synthesis of various elements of historical, artistc and cultural matrix Romaneque, Gothic and Venetian. Finally looking from the town outwards it is possible to see in addition to a fantastic view of the sea in the distance also a vast expanse of Olive Trees. 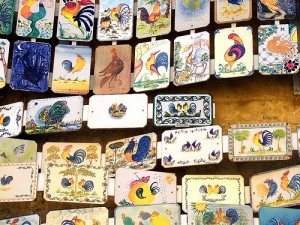 Grottaglie known worldwide for its centries-old pottery tradition. In fact numerous ceramic artifacts dating back to ancient Greece were found. Which shows us just how old traditional handcraft is. Grottaglie is the only Puglian centre to have the trademark D.O.C. It has also been added to the list of the Cities of Italian Ceramics. A famous and characteristic zone for ceramics is Giudecca. It is located along the Ravine of San Giogia, at the foot of Episcopio a medieval castle. Here we can find small shops and pottery workshops. These help to keep the tradition alive and to export the ceramics all over the world. 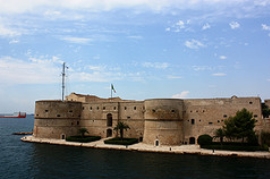 Founded by the Spartans in 706 a.c. It was a thriving colony of The Magna Grecia. Then subsequently under the rule of the Roman Empire. Among the many attractions a special mention should be given to the Museum Marta. An exceptional archaeological museum which is one or the most important in the South of Italy.
It would be an understatement to remember it only for its now famous golds (tiaras,jewellery,sceptors) and much more: from refined treasure, silver caskets, findings in soft stone, a rich collection of antique vases, to spendid mosaics from the hellenistic houses of the ancient Ionian city that dared to defy Rome. 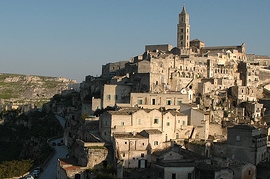 Matera better known as the city of stone and characteristic for its picturesque old part situated on the edge of a deep ravine. Matera, with most of its houses dug into the cliff, offers a spectacle of great interest, both from a historical and natural point of view. It was also made famous in 2004 by Mel Gibson, his film The Passion was filmed there. 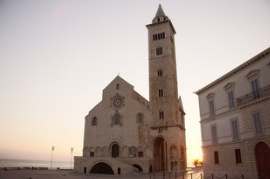 Trani was at its full splendor during the reign of Federico II. The old town is full of wonderful churches and noble palaces, evidence of an illustrious past. The cathedral of Trani is without a doubt one of the most impressive churches of Italy. 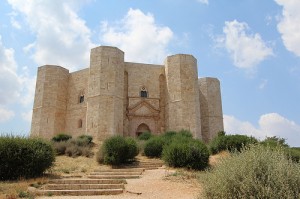 540 metres above sea level, isolated on a hill in the Puglian Murgia lies Castel del Monte. The most famous monument of the era of Federico II di Swabia. Castel del Monte is unique in its shape which is octagonal, from its summit there are 8 octagonal structures that have the appearence of towers. The moat and the defensive work was designed not to defend the territory, but to celebrate the emperor and his power. 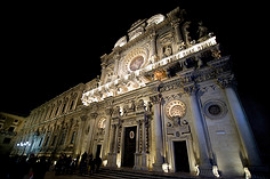 Lecce the capital of Salento. Since the second half of the 500s it became a smaller version of Versailles which attracted the nobility. The baroque style of Lecce is very partcular and has little to do with that of the 17 th century baroque of Rome.It is tied to a secret all of its own: the unique quality of the stone of Lecce, a marble limestone compact and homogeneous. The monument that best illustrates the Lecce baroque is the Baslica of Santa Croce. 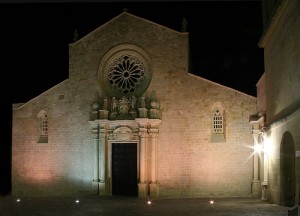 Otranto in the Middle Ages was one of the most important centres of domain bizatino in Italy. The most important monument without a doubt is the cathedral Annuziata. A solemn temple sacred to the memory of the 1480 massacre when Otranto was attacked and besieged by the fleet of Maometto II.